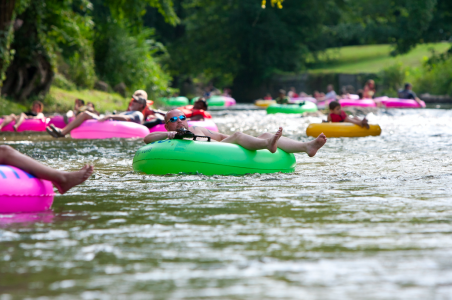 The river is calling, and we all must go. Floating the river is as much of a Pacific Northwest pastime as it is a rite of passage. On any given summer day, hordes of floaters embark on a fluid pilgrimage from launch to takeout—and you could be one of them. Just you, an inner tube that burns your thighs after prolonged exposure to the sun, the great outdoors, river water that may or may not have come directly from a glacier 20 minutes prior, and 50 of your closest friendly strangers. Let’s cover some floating basics.

The do’s and don’ts of floating

Now that you’re scared of floating, let’s find you a river to float on.

Where to float in the Pacific Northwest

This urban float lacks the seclusion of nature, but it’s super accessible by TriMet for most city-dwelling folks. Your best bet is to start is Sellwood Riverfront Park and disembark at the Hawthorne boat dock, conveniently located near an abundance of post-float watering holes.

Suggestion: End your urban floating excursion with a sandwich and some beer at Bunk Bar.

Will floating the Willamette cause you to grow an extra toe? Anything’s possible, but it’s far less likely today than it was a few decades ago.

Few things scream summer in Bend louder than floating the Deschutes. If you’re in it for the long haul, put in at Riverbend Park above the Old Mill District and enjoy the ride all the way to Drake Park. You can also do a half float by going Old Mill to McKay or McKay to Drake.

Bonus: There’s a shuttle that will pick you up in Drake and take you back to Riverbend.

Double bonus: Now that the requirements for a summer bod have finally been lowered to simply having a body in the summer, you can start your journey with some bottomless steak fries at Red Robin in the Old Mill and end it downtown at Bend Brewing Company with a beer and their legendary nachos.

It might be known as Track Town, USA, but some days in Eugene are just too hot for putting your feet to the pavement. Luckily, the McKenzie River offers a great alternative to sweating without having to go for a run.

Floaters looking for a shorter, more accessible ride can put in at Harvest Landing and get out at Armitage Park. Those in search of a more leisurely float can make their way east to the small town of Vida and enter the McKenzie at Dorris Park. You’ll definitely want to plan for this float by leaving one car at the starting line and another at the finish.

The Washougal is a great river for a scenic nature float, but it’s also so much more. With neat rock formations that make for excellent sunbathing and calm pools that are safe for swimming, the Washougal is best enjoyed at a leisurely pace.

Put in at Mile 3 on Washougal River Road for two miles of restful bliss in the sun as you drift along the winding, forest-lined waterway. No shuttle service or local transit for this one, so be sure to plan ahead with a car at the takeout point.

Bonus: This river tends to be a lot less crowded with inner tubes than the aforementioned floats.

Another quiet float, the East Fork of the Lewis River offers two hours of cruising with a number of swimming holes along the way. Enter the river at Lewisville Regional Park and exit at Daybreak Park.

A few words of caution: The Lewis River runs a little faster and colder than others. If you aren’t a confident swimmer, this may not be the float for you. Wear safety gear and, whatever you do, keep right at the fork to avoid a large, fallen tree that blocks the route on the other side.

Bonus: If you get off the river in the early afternoon, you can make it to “hoppy hour” at Barrel Mountain Brewing. Beers are only $3 from 2–3 p.m.

Need a place to store your floating gear when you’re done? We gotchu, fam.