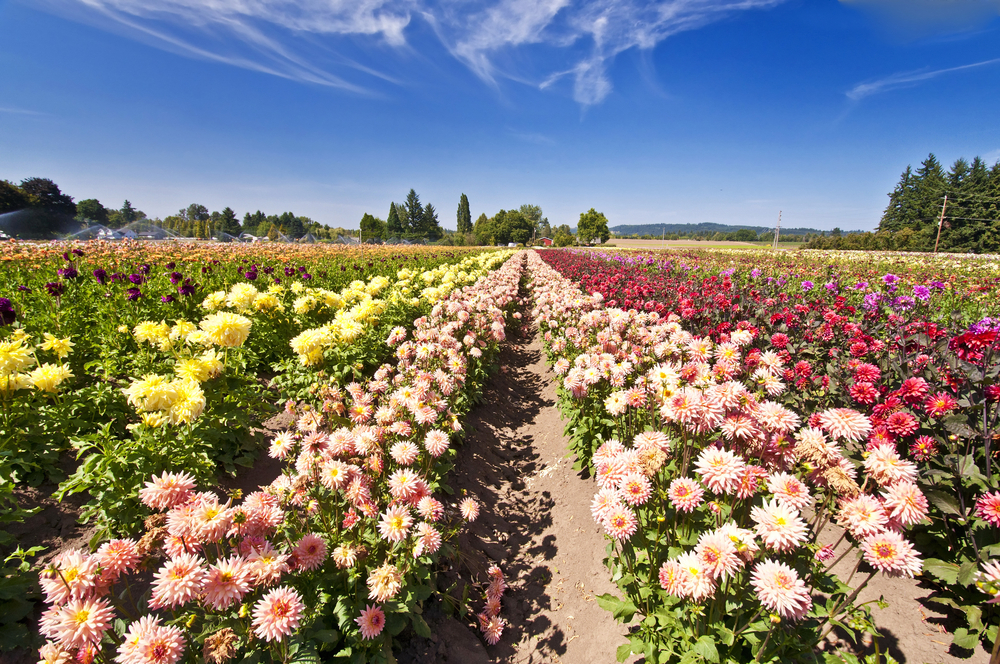 About 20 miles south of Portland lies the charming town of Canby. Like many Oregon towns, Canby is laid-back and the folks who live here are easygoing. Cozy farming communities surround Canby as far as the eye can see, so there is gorgeous scenery all around. The schools are good, crime is low, and diversity is high in Canby. Plus, the nightlife can be fun. Of course, every city has drawbacks, and Canby is no different. If you’re moving to Canby, Oregon, you’ll want to know about the good and the bad. If so, keep reading to find out everything good and not-so-good about this humble town. Here are all the pros and cons of living in Canby, OR!

Fun for the Whole Family Living in Canby

Have you ever wondered where the largest dahlia growing company in the United States is? If yes, you now know it’s in Canby, Oregon! At Swan Island Dahlias, you’ll find 40 acres of former farmland are 370 varieties of dahlia blossoms! But there’s more to do here in Canby than meets the eye. For example, you can ride the Canby Ferry or spend the day in one of Canby’s excellent parks. There’s a huge dog park at Molalla River State Park for your furry friends, too. It’s also a great place for a little fishing and has a free boat ramp. Farm tours, farmers’ markets, and, for the parents, winery and brewery tours are plentiful in Canby! This is Oregon farming country at its best and offers an almost idyllic lifestyle perfect for young families.

Pros of Living in Canby, OR

Oregon has incredibly fresh and abundant local produce (if you haven’t heard already). From fresh produce to flowers, crafts, coffee, and more, buying local is a lifestyle in Canby. And that lifestyle is made easy by the Canby Farmers Market. You’ll find everything you could imagine here and it is all locally sourced and wonderful!

Canby is one of the safest towns in Oregon, with almost 50% lower crime than the national average. Many folks leave their doors unlocked, and everyone knows their neighbors well. Canby is a tight-knit community, and violent crime is very rarely seen. In addition, property crime is low, which is a good sign no matter where you live. Overall, the low crime is part of what makes living in Canby, OR so peaceful!

Summer in Canby, Oregon, is Delightful

While many parts of the U.S. are sweltering and humid, Canby, is comfortable, dry (mostly), and beautiful. Temperatures rarely go above 85 degrees Fahrenheit, and at night, it cools off beautifully for sleeping. Also the wonderful weather lasts quite a while from May through September. You’ll occasionally see rain in Canby, Oregon, but it doesn’t stick around long. So when the sun shines, it truly is a magical place.

Outdoor Adventure and Sports in Canby, OR

No matter your adventure or sport of choice, you can find it in Canby, Oregon. From canoeing, kayaking, and paddle boarding, to rafting, all the water sports are fantastic here. Not to mention that there are also hiking trails galore and some excellent fishing spots in Canby. If you love camping, you’ll love living in Canby, OR. If you’re a fan of the great outdoors, Canby, Oregon, is a fantastic place to live!

Did you know that Oregon is one of the biggest craft beer producers in the United States? It’s true, and Canby shares the state’s love for delicious beer! You’ll find several breweries nearby, all serving their own excellent flavors. As for wine, Canby, Oregon, is part of Oregon’s Wine Country and makes some of the best vino in the country!

Below are a few standout wineries and breweries in Canby, Oregon, for when you want to wet your whistle. By the way, all of them are within easy reach of the town.

Cons of Living in Canby, OR

Canby is a Tiny Town

For some, Canby’s size is perfect. As a small town, you can quickly get to know everyone in Canby! And with less than 17,600 people, newcomers can make their home here in a tight-knit community. That’s perfect for many of the people who live here. However, if you’re a fan of big city life, it might not be for you. There are few trendy restaurants, but there are no clubs, and you won’t be seeing the latest Broadway shows in Canby. If you’re fine with that, you’ll love it here. If not, Canby, OR, might be a little on the dull side.

It Rains a Lot in Canby

Rain in the northwest is a frequent occurrence, and Canby, Oregon, is no different. We get a whopping 43 inches of rain a year, much higher than the national average. Interestingly, we get a lot less snow than many other Oregon towns. With a thriving craft beer scene, you’ll at least be able to drink delicious brews in Canby when it rains.

Housing is Expensive in Canby, OR

Housing is relatively expensive in Canby, with a typical home value of just under $600,000. That’s especially high when you consider what a small town Canby is. One reason, however, is that Canby, Oregon is close to Portland and is a major Portland suburb. Another is that Canby home values have increased almost 25% in the past two years. So, while Canby, Oregon, might be a great place to live, buying a house is an expensive task. (Not San Diego, California expensive, but still expensive.)

The Pros and Cons of Living in Canby, OR

Brought to you by Northwest Self Storage

You now know the most notable pros and cons of living in Canby, Oregon. We hope the information was useful and informative. If you’re moving to Canby, Oregon, and need to store your things, Northwest Self Storage can help. Northwest has two self-storage locations in Canby, OR, with safe, clean storage units.

We recommend reserving a Canby OR storage unit before leaving your current home. It’s easy and fast, and there’s no deposit necessary. You won’t need your credit card and your storage unit will be reserved immediately. Most importantly, it will be ready when your movers arrive to safely, affordably, and conveniently store your things.